AfLIA in conjunction with the Ghana Ministry of Education and the Ghana Library Authority, hosted the 3rd Roundtable Meeting of Ministers in charge of Public Libraries in Africa at Labadi Beach Hotel, Accra-Ghana from 29th -30th October, 2019.  The theme for the Summit was “Libraries on the African Development Agenda – Progress Made”.  The purpose of the summit was to discuss the progress made by Libraries towards achieving the African Development Agenda. It was also to emphasize the point that access to information is crucial for development in Africa, and to reiterate that Libraries are best suited to perform that role. The meeting was attended by representatives from thirty-two (32) African countries, Fourteen (14) sector Ministers or representatives from Angola, Burkina Faso, Cameroon, Central African Republic, Ghana, Guinea Bissau, Kenya, Lesotho, Malawi, Nigeria, Senegal, South Africa, Uganda and Zimbabwe attended the meeting.

The meeting was chaired by the Ghana’s Hon. Minister of Education Dr. Matthew Opoku Prempeh.  The two-day brainstorming session afforded the Ministers an opportunity to discuss issues on how governments can integrate Libraries in their National Development Plans and ensure the allocation of resources to Libraries towards the achievement of the Development Agenda. 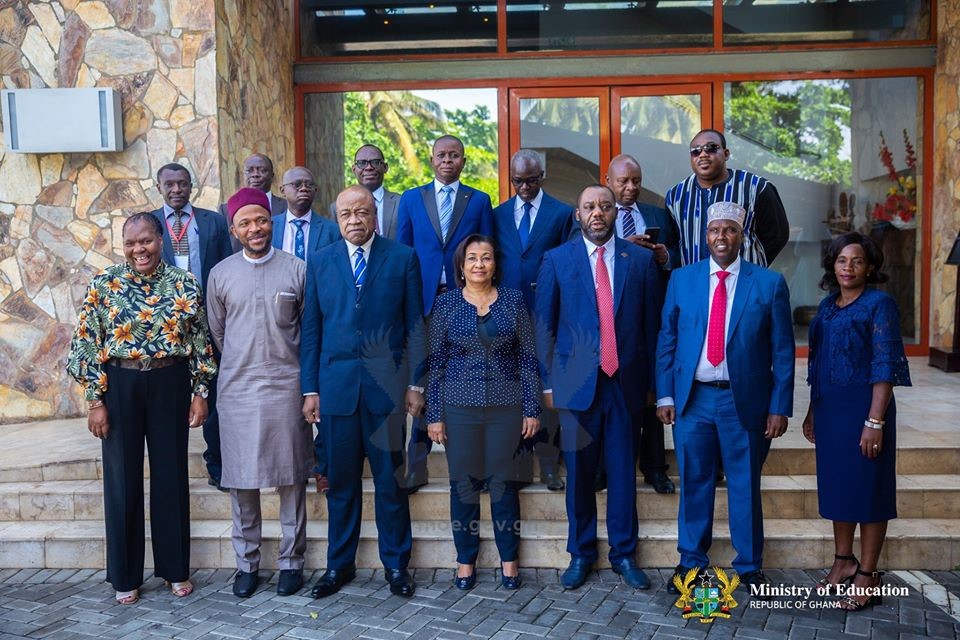 In his welcome address, the Chairman iterated the purpose of the meeting which is related to the two existing Documents (Cape Town Declaration and Durban Communique). He stated that the development of Africa depends on effective access to information which does not just happen but requires proper planning, availability of funds, good equipment coupled with the skills of information custodians (Librarians). He called on all Africa Ministers of States in charge of Libraries to include Libraries in their National Development Plans to enable the achievement of the AU 2063 Aspirations.

Prior to the Summit, On 28th October, a meeting was organized at the Erata Hotel in Accra for Directors of National Libraries in Africa to discuss the progress of work and efforts being made by National Libraries in their respective countries towards achieving the various Developmental Agendas especially the AU 2063. Thirty- two (32) National Librarians attended the meeting. They had the opportunity to interact among themselves, with their Ministers as well as Emerging African Library Leaders who attended the summit.

Several presentations made at the summit included a progress report on countries since Cape Town Declaration and Durban Communique by all the Ministers of States.

The IFLA Secretary General, Mr. Gerald Leitner centered his presentation on the Expectations from governments in support of Access to Information and Libraries for UN 2030 and AU 2063 Agendas.

The Executive Director of AfLIA, Dr. Helena Asamoah-Hassan highlighted on AfLIA and library human capital for Africa’s development. She used the opportunity to inform participants on how African Libraries are driving development across the 7 Aspirations of the AU 2063 Agenda. She said AfLIA is deeply committed to the advancement of Libraries in the continent and firmly believes that this high-level advocacy will bear numerous tangible fruits for Libraries of all types in Africa.

Report from the Meeting of the Directors of Libraries was read by the Director of Training, AfLIA, Dr. Nkem Osuigwe (Appendix 2).

The Director of Research and the Research Coordinator of AfLIA also gave an insight on the AfLIA/TASCHA Advancing Library Visibility in Africa (ALVA) Project – Now and the Future. 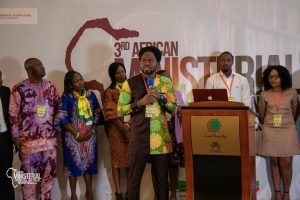 Finally a video of impact stories on how libraries meet the development agenda in Ghana was shown for the delegates to see how the Ghana Library Authority is impacting the society through its services nationwide.

The Summit did not end without delegates tasting the hospitable nature of Ghanaians.  A dinner was organized in honor of the Ministers at the Ghana’s National Theatre.  It was a night of merry making as Ministers of State had the opportunity to socialize with other delegates.   Present at the dinner to entertain the Ministers and their guests were the Ghana Police Band and the Abibigroma Cultural Troupe.  The Chairperson for the Summit Hon. Dr. Matthew Opoku-Prempeh welcomed delegates to the dinner.  He was also the first to open the floor for delegates to dance. Below are a few pictures from the Dinner. 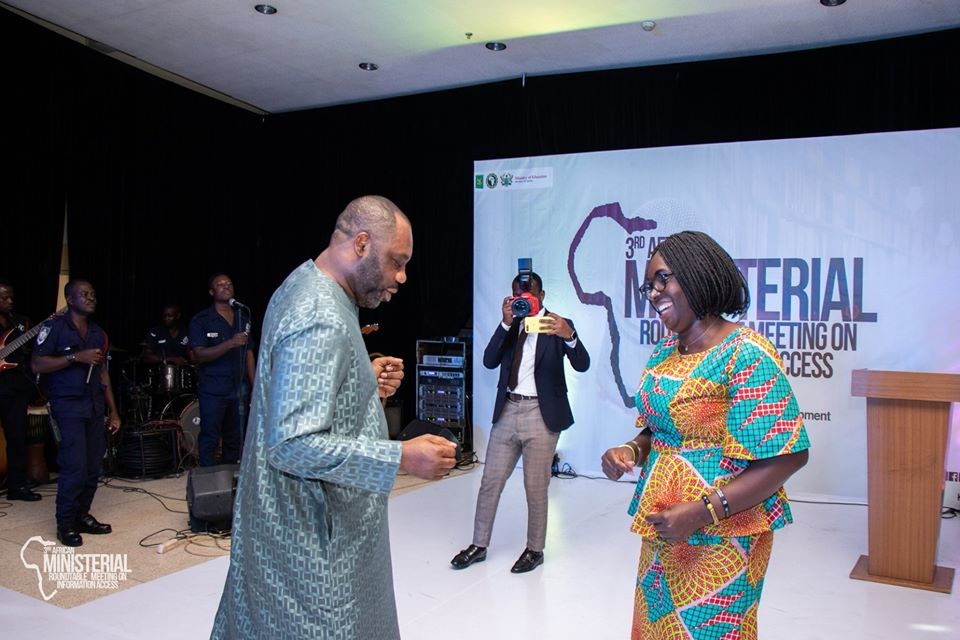 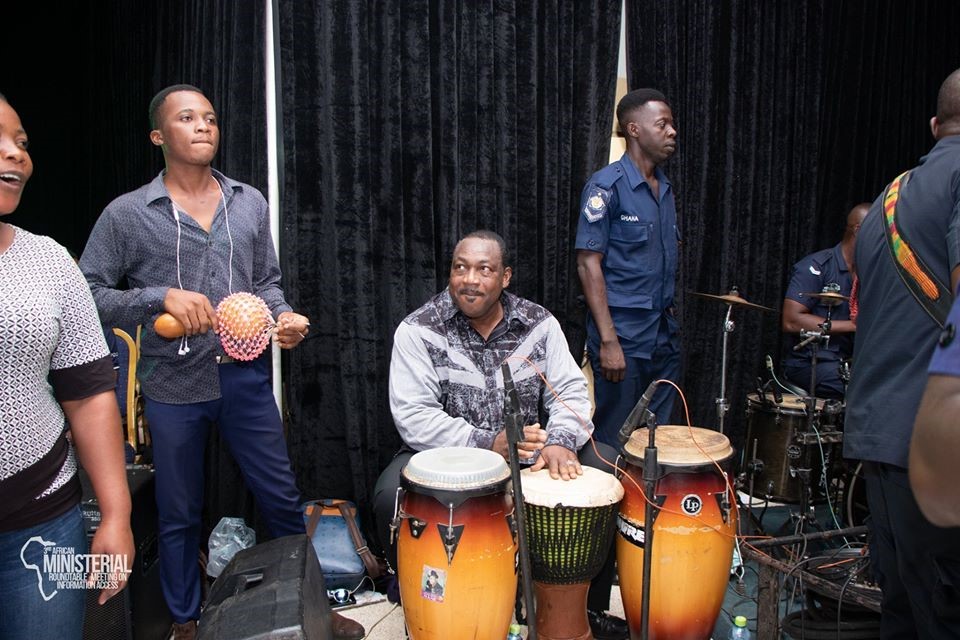 Minister showing his drumming skills and having fun

Ministers and Directors of Libraries showing their dancing skills

The Summit ended on a good note as all the Ministers and representatives from various countries agreed on the main decisions made during their roundtable discussion which became the Accra Declaration 2019 (Appendix 1 – English | French | Portuguese). All the fourteen Ministers of State responsible for Libraries who attended the Ministers Summit in Accra, Ghana from 29-30th October 2019 appended their signatures to the Declaration and made it a formal Document for submission to the African Union. A Closing Cocktail was organized by Ghana’s Minister of Education for his colleague Ministers to bid them safe travels to their various countries.