The Cameroon Association of Librarians, Archivists, Documentalists and Meseographers – ABADCAM, donated vital items to the University of Bamenda (UBa) and the Catholic University of Central Africa (UCAC) as part of efforts to help fight the deadly novel Coronavirus pandemic. The package, comprising of ABADCAM branded face masks, hand sanitizers, aprons, soaps, Veronica buckets and other hand-washing accessories were presented to both universities on Wednesday, June 17, 2020.

Donating the items at UBa, the President of ABADCAM, Mr. Alim Garga said the initiative was borne out of a brainstorming session he had with the Vice President of ABADCAM Madam Bongnda Winifred B. Menyong, who is the Chief Librarian of the University of Bamenda, as they reasoned together on ways ABADCAM could lend a helping hand to some of her members as a sign of solidarity in the fight against the pandemic. The UBa, UCAC and other libraries were chosen for this exercise.

Mr. Garga, who also is the Vice President of AfLIA, handed over the items to the University of Bamenda through the Vice-Chancellor Prof. Theresia Nkuo-Akenji, represented by Deputy Vice Chancellor in charge of Teaching, Professionalization and Development of Information and Communication Technologies, Professor Suh Cheo Emmanuel. Also present at the brief ceremony were the Deans and Directors of the twelve establishments alongside their collaborators. At UCAC, the Rector received the items in the presence Secretary Generals of the university, Deans of Faculties and other staff members. Receiving the donation on behalf of UCAC, the Rector expressed his gratitude for the timely gesture made by ABADCAM and promised to judiciously use the items to improve on preventive measures against COVID-19 on campus. 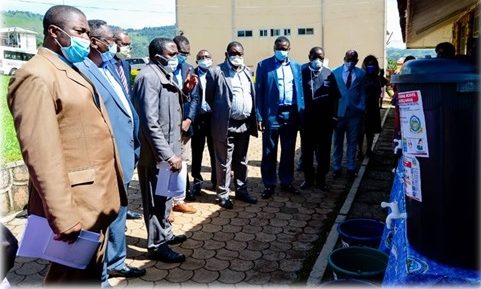 Professor Suh Cheo Emmanuel, Deputy VC, presided over the ceremony, explaining the benefits UBa gets as a registered member of organizations like ABADCAM and AfLIA, as evident in the acquisition and use of electronic resources now widely disseminated on and off campus especially in the face of the COVID-19 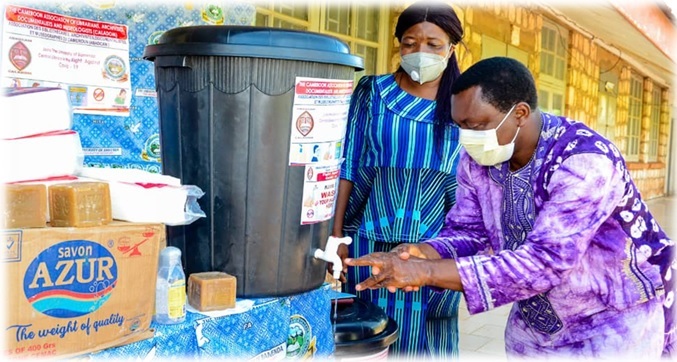 Mme Bongnda Winifred Menyong, the Chief Librarian of The University of Bamenda and the Vice-President of ABADCAM watches on as Professor Tabod Charles, the Dean of the Faculty of Science, demonstrating the proper way of handwashing with soap and how to properly dispose the used tissue after wiping your hands.

At UBa, proper method of hand-washing was demonstrated by the Dean of the Faculty of Science, Professor Tabod Charles. The students and staff were sensitized on the importance of the COVID-19 preventive measures such as social distancing, proper hand washing techniques as well as wearing of personal protective equipment (PPE). Professor Suh Cheo Emmanuel expressed gratitude to ABADCAM, for thinking about the UBa community in such a challenging moment. Following the easing of restrictive measures by the government, the University of Bamenda has programmed lectures for her twelve establishments in batches of three establishments at a time. The presentation of these kits was timely as it took place when the second batch of establishments had just commenced.

The hand-washing accessories were installed at the Central Libraries of UBa and UCAC, as well as some vantage positions on the campuses. This gesture is an act of solidarity and engagement of ABADCAM’s unflinching support in the sensitization and fight against the pandemic. It will go a long way to enable the students and staff of the beneficiary universities to be more alert in the fight against the spread of COVID-19.